MY Age: The Age of Exploration, 15th Century to Early 17th Century

Well, I’ve talked quite a bit about my life and my accomplishments, I think it’s time to talk about the time period that I lived in, The Age of Exploration. My country of Portugal took the lead in the European age of expansion when it began to explore the coast of Africa under the sponsorship of my man, Prince Henry the Navigator. His drive was a blend of seeking a Christian kingdom as an ally against the Muslims, acquiring trade opportunities for my country, and spreading Christianity to different parts of the world. Through regular expeditions, the Portuguese slowly crept down the African coast and discovered a new source of gold along the southern coast of the hump of West Africa, which we call the Gold Coast. Later on my people leased land from local rulers and built stone forts along the coast. The noble Portuguese men later found themselves in India. Hearing reports to India around the southern tip of Africa, the Portuguese sea captains continued poking around the area. Vasco da Gama arrived in Calicut and didn’t find any Christians there, but he sure did find spices. After that we returned annually and sought to destroy Arabic shipping and become a part of the spice trade. Later on we launched expeditions farther east to China and the Spice Islands, but we lacked the power, the population, and the desire to colonize Asian regions. We Portuguese were pretty darn successful, huh?! Our success was basically a matter of guns and seamanship.  Our effective use of naval technology and our tactics gave us superiority over our lightly armed rivals.

The Age of Exploration was AWESOME :))
Posted by Neville Chamberlain at 9:36 PM 10 comments:

My Administration and Diplomacy in Goa, 1514

On November 4th, 1509, I became the second Governor of the State of India, a position that I held until my death. I intended to dominate the Muslim world and control the spices’ trading network with my power. Initially, King Manuel I and his council in Lisbon tried to distribute the power, creating three areas of jurisdiction in the Indian Ocean. One Jorge de Aguiar was given the area between the Cape of Good Hope and Gujarat. He was succeeded by Duarte de Lemos but left Cochin and then for the kingdom, leaving his fleet to me. I later had conquest over Goa and Malacca. In 1514 I was devoted to the administration and diplomacy in Goa, concluding peace with Calicut and receiving embassies from Indian governors, strengthening the city, and stimulating the marriage of Portuguese with local women. At that time in my day, Portuguese women were forbidden from traveling overseas due to superstitions about women on ships, and well as the dangerous journeys that we strong men encountered. In 1511, the Portuguese government encouraged our explorers to marry local women, under a policy that I set up. To promote settlement, our King of Portugal granted freeman status and exemption from Crown taxes to Portuguese men who ventured overseas and married local women. Thanks to me, mixed marriages flourished. I appointed local people for positions in the Portuguese administration and didn’t interfere with local traditions, except for the “sati.” This was the practice of immolating widows, which I forbade.
Posted by Neville Chamberlain at 9:36 PM No comments:

The Portuguese Conquest of Malacca! 1510

Just to give you guys some background information to my amazing conquest of Malacca, in 1509 a Portuguese armada defeated a combined fleet of Turkish and Indian ships off the coast of India and began to impose a blockade on the entrance to the Red Sea to cut off the flow of spices to Muslim rulers in Egypt and the Ottoman Empire. The following year, I set up port facilities at Goa, on the western coast of India. After that, Goa became the headquarters for Portuguese operations throughout the entire region. Although Indian merchants were permitted to continue their trading activities, we conducted raids against Arab shippers. In search of spices, we now began to range more widely in search of the source of the spice trade. In 1511, I sailed to the harbor of Malacca on the Malay peninsula. Malacca had been transformed by its Muslim rulers into a thriving port and a major stopping point for the spice trade. I NEEDED control of Malacca, as I explained in my intro. After a short but bloody battle, we seized the city and massacred the local Arab population. The slaughter initiated an intense and fierce struggle between us superior and amazing Portuguese against those weak Arabs. From Malacca, we launched expeditions farther east. The new trading empire was now complete! Within a short amount of time, we noble Portuguese managed to seize control of the spice trade from the Muslim traders and garnered substantial profits for the Portuguese monarchy. We, are, amazing :). 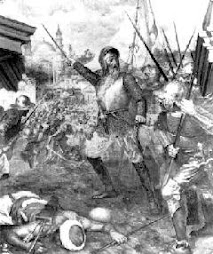 Most amazing day ever :)
Posted by Neville Chamberlain at 9:35 PM 3 comments:

I thought this was a cool picture of my expedition to Hormuz
Posted by Neville Chamberlain at 9:35 PM No comments:

Salutations my fellows, my name is Afonso de Albuquerque and I was a Portuguese fidalgo (nobleman), a naval general officer, a Portuguese admiral and statesman, the founder of the Portuguese Empire in the East, and the coolest man ever, if I do say so myself. I was born somewhere between 1453 to 1462 (I’m so old even I don’t remember). I was born in a city called Alhandra, near Lisbon in Portugal. My parents are Goncalo de Albuquerque and Dona Leonor de Menezes. I’m quite an accomplished man if I do say so myself, and I will go further in to my accomplishments in my other blogs. In my day, during the Age of Exploration, I was an exceedingly energetic commander of Portuguese India and I greatly expanded Western influence in the area. After Vasco da Gama returned to my country of Portugal in 1499 with vast riches from his expedition in the Indian Ocean, my country was eager to spread our influence in hopes of outflanking the Muslims and hoarding maritime trade. I was one the men sent out to do just that. I established my military career by campaigning in North Africa against Muslims. I spend most of my days exploring and raiding the East African shores. I sought to destroy all Arab trading in the region and put all commerce in the hands of the Christian governments. Having spent much of my youth fighting the Moors in Spain, I was pretty sure that those Muslims were a threat to Christian civilization. I also knew that cutting off Arab trade in Indo-China would greatly weaken those Ottoman Turks who were threatening all of Europe at the time. One of my major military victories was capturing the island of Socotra, impeding Arabian trade with India. From the beginning I sought to establish a dominant Portuguese empire in the East and destroy Muslim power, even in their native lands. Getting in to when things happened, I was appointed viceroy of Portugal’s possessions in Asia in 1506. From 1509 to 1515, I served as the governor of India, and at the same time extending the empire eastward. Pretty impressive, huh? I seized Goa in 1510 and made it the center of Portuguese power and trade in the East. By 1515, my super amazing and fantabulous conquests included Hormuz in Persia (which is now some place called “Iran”), Malabar in India and the Sunda Isles, Ceylon (“Sri Lanka” I believe is the new modern name), and Malacca in Southeast Asia. Today, I’m “historically famous” (yes!!) for my conquering of various African, Indian, and Southeast Asian locales. Apparently, my fellow Portuguese men, to British dismay, also made it so that I am also nowadays known as “Afonso de Albuquerque the Great!” Isn’t that wonderful?!  I am widely known for wiping out the Muslim population during that time period. Now, many people in this day and age would consider that as being cruel and harsh, but hey, I had to do what I had to do. For me, conquest of Malacca served two purposes. It could help destroy the Arab spice trade and also provide us Portuguese men with a way station on the route to the Moluccas. Well, now that you have a little bit of my background information, I hope that the rest of my blogs will be more understandable and more interesting for you guys. :)